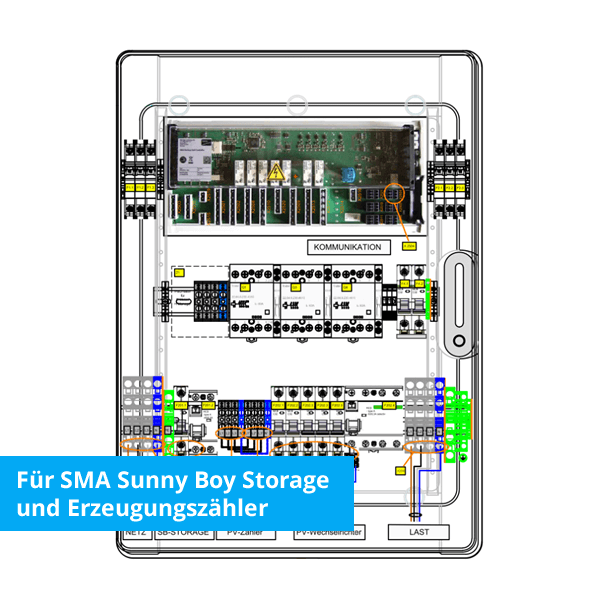 In the event of a power failure, a standby power system safely disconnects the connected PV system including remaining customer system from the public power grid and simultaneously provides the customer with a 1-phase standby power supply. For 10 kWp systems, a production meter is required by the power supply company. This can be connected directly to the corresponding terminals of the box.

Due to the new "Battery backup distribution" system from enwitec, which is ready for connection and pre-tested, installers no longer have to build the switching device themselves, which is time-consuming and cost-intensive, and no longer have to assume their own warranty. So far, enwitec's "Switching device for standby power/battery backup distribution" (in short, "BBD") is the only product recommended in the SMA planning guide for use in the "Flexible storage system". The "BBD" for the SMA "Flexible storage system" uses only components approved by SMA, thus forming the basis for maximum reliability of supply.

The standard versions with a throughput power of 20KW allow the feeding of three SMA Sunny Boy Storage battery inverters, whereby the grid separation is always 3-phase and all-pole.

Recommendations for use in various systems:

Please refer to the official SMA compatibility list in this regard.

For larger systems, the additional inverters are then designed as 3-phase inverters!

Tech tip
The design factor of SMA must be observed! If a large PV system is planned, additional 3-phase... more
Zurück

The design factor of SMA must be observed! If a large PV system is planned, additional 3-phase inverters must be used. These will not start in standby power operation and will not exceed the design factor.

Functional cookies are absolutely necessary for the functionality of the webshop. These cookies assign a unique random ID to your browser to ensure an uninterrupted shopping experience through multiple page views.

Session:
The session cookie stores your purchase data across multiple page views and is therefore essential for your personal shopping experience.
Wish list:
The cookie enables the user to have access to a wish list over several sessions. This keeps your wish list open even after different browser sessions.
Device association:
The device association helps the shop to provide the best possible display for the currently available display size.
CSRF token:
The CSRF token cookie contributes to your security. It strengthens the protection of forms against undesired hacking attacks.
Login Token:
The Login Token is used to recognize users across sessions. The cookie does not contain any personal data but enables personalization across multiple browser sessions.
Cache exception:
The cache exception cookie allows users to read individual content independently of the cache memory.
Cookies Active verification:
The cookie is used by the website to find out if cookies have been accepted by the user's browser.
Cookie preferences:
The cookie is used to save the user's cookie preferences across multiple browser sessions.
Origin information:
The cookie stores the user's originating page and first visited page for further use.
Activated cookies:
Stores which cookies have been accepted by the user for the first time.
Newsletter:
This cookie remembers whether the newsletter pop-up has been closed, so that it is not displayed again.
Disable Popup:
This ensures that a pop-up is only displayed once.
Popups
Banner Cookie:
This cookie remembers if the banner element has been closed, so that it is not displayed again.
Marketing

Tracking cookies help shop operators to collect and evaluate information about the users’ behavior on their website.

Google Analytics:
Google Analytics is used to analyze the traffic on the website. Thereby, it is possible to create and analyze statistics about website activities.
Cookies @ Memodo, to make your visit to the Memodo online shop extra special.
Imprint Data protection